Tucked into a sheltered harbour on the east coast of Aotearoa New Zealand's South Island, Ōtepoti Dunedin is a city rich in heritage, renowned for its wildlife and distinctly quirky character.

Day One | North Dunedin and University There's so much to see at Dunedin Botanic Gardens. Photo: Dunedin NZ Start at the end of the line, with the Northern Cemetery and Larnach’s Tomb. Commissioned by the businessman and politician William Larnach as a memorial to his first wife Eliza, the mausoleum is a replica in miniature of Dunedin’s First Church, complete with soaring spire.

The Dunedin Botanic Garden is New Zealand’s oldest botanical gardens, and a Garden of International Significance. Highlights include a 3000-plant rhododendron dell, geographic and native plant collections, a heated Edwardian glass house and a heritage-listed sound shell and fountain.

Head to the university via Castle Street, Dundas Street and surrounds - an historic hotbed of scarfie antics and cheekily named flats. It may surprise you to learn that many of the streets’ classic student digs have been heritage-listed. One of the most well-known (although not heritage listed) is 660 Castle Street where Kiwi band Six60 (note the number) formed.

Within 21 years of its founding in 1848, Dunedin had a university, an unequivocal display of commitment to higher education by the city’s Scottish Presbyterian settlers. They did not indulge in half-measures. The first phase of development at the University of Otago’s current site beside the Leith produced some of the country’s finest buildings, statements in stone that spoke of Dunedin’s wealth and ambition. Start with the ‘Clocktower complex’, a Neo-Gothic cluster centred on Maxwell Bury’s 1878 Registry/Clocktower Building. Don’t neglect the medical school strip on Great King Street, home to the august Lindo Ferguson Building, the neo-Classical Scott Building and the Faculty of Dentistry’s 1960s Modernist HQ with its recent Jasmax-designed addition. Along with the Hercus, Sayers and Wellcome buildings, the cluster showcases 20th Century architecture, from neo-Classicism and Art Deco to International style and Brutalism.

Housed in a Category 1 building beside the campus, Otago Museum has an internationally significant natural science collection and world’s best collection of articulated moa skeletons, among other treasures. The bicultural Tūhura science centre is brilliant for kids of all ages.

Nearby, you’ll spy the distinctive three-gabled façade of the University Book Shop, a onetime confectionary factory turned literary hub after the UBS relocated there in 1962. Charles Brasch moved the iconic New Zealand literary journal Landfall into an upstairs room the same year.

Finish at Knox Church. Designed by RA Lawson for a group of Congregationalists, Methodists and United Presbyterians, the bluestone Gothic pile is Dunedin’s largest church. 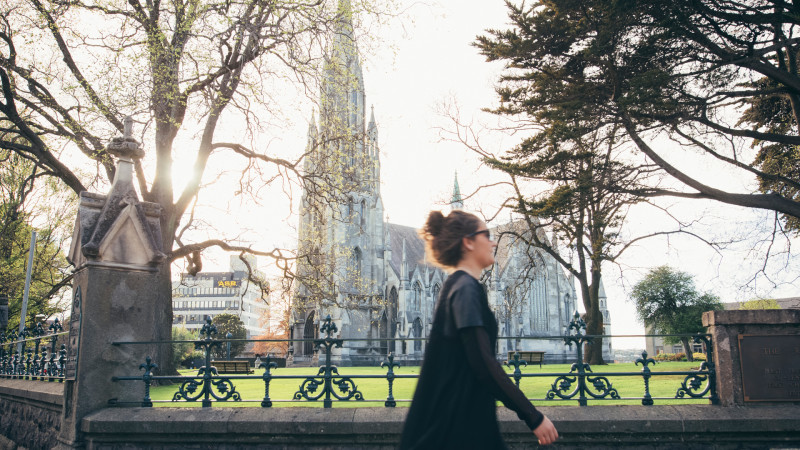 In 2014, Dunedin was named a UNESCO City of Literature. Start the day in that spirit with a visit to Robbie Burns the poet, whose bronze statue presides over the Octagon. The upper Octagon streetscape is dominated by St Paul’s Cathedral and the Town Hall, with a facade reputedly inspired by Michelangelo’s Palazzo Senatorio in Rome.

Just south of the Octagon is Bell Hill. Its once far more imposing mass was considered an obstacle to the town transitioning into a city. Over a ten-year period from the early 1860s it was cut back and down.

Crowning Bell Hill is the ubiquitous Lawson’s masterpiece, First Church. Criticised by some contemporaries as a worldly extravagance, it is Dunedin’s bijou Gothic cathedral, crowned by a 54-metre spire. The story goes that, approaching the eve of the official opening in 1873, realising the spire was shorter than specified and on a slight lean, Lawson had it dismantled and rebuilt.

The church is part of a larger heritage precinct near Moray Place. Notable buildings include the decommissioned 1896 Dunedin Prison – a rare example of a Victorian purpose-built courtyard prison – and the city’s Neo-Gothic 1902 Law Courts.

The area’s highlight is the extraordinary Flemish Renaissance-style Dunedin Railway Station, a beautifully decorative ode to the age of steam, with a half-kilometre platform, a domed tower, and a booking hall mosaic floor of 750,000 Minton tiles. Upstairs you’ll find the Otago Arts Society gallery, and the New Zealand Sports Hall of Fame. On Saturday, the carpark is transformed by the Otago Farmers Market into a smorgasbord of delicious local produce and artisan treats.

Spend some time at the excellent Toitū Otago Settlers Museum, which tells the social history of the people who shaped Dunedin. Opened in Edwardian times, it was redeveloped a decade ago with a dramatic new prow-shaped northern entry.

Wander south through Queens Gardens to Vogel St, the main artery of the buzzy Warehouse Precinct and the heart of Dunedin’s terrific street art trail, featuring murals by more than 30 local and international talents. Recharge your batteries at one of the many brunch spots in the area. Take a look at the former Otago Harbour Board building, then head up the hill to explore historic Princes Street. Check out the refurbished John Burnside designed Terminus Building which was built in 1880 and now houses Moiety restaurant. “He liked a bit of swank”. So said poet Charles Brasch of David Theomin, the wealthy merchant who built Olveston, a palatial 35-room ‘family home’ in Dunedin’s Green Belt. Gifted to the city by Theomin’s daughter Dorothy, Olveston opened as a historic house museum in 1967. It is a time capsule, dressed in magnificent period rugs and fine wallpapers, and furnished with the art and artefacts Theomin financed by importing pianos and other ventures.

Theomin had nothing on William Larnach when it came to grand designs. On a ridge of the Otago Peninsula, that ill-starred entrepreneur built a castle of 43 rooms including a ballroom, finished with Italian marble and Marseilles cobbles and staffed by 46 servants. Larnach called it ‘The Camp’, but his vision was of a residence of a scale and sumptuousness never before seen in the colonies. Privately owned by the Barker family since the 1960s, Larnach’s Castle has been beautifully restored, and is set in a Garden of International Significance.

Along the top of the peninsula, on Highcliff Rd, you’ll spy drystone walls – stock fences made using volcanic boulders cleared from the fields. Head on to the windswept Taiaroa Head Royal Albatross colony. When you’ve finished watching giant birds courting, nesting and gliding, explore Fort Taiaroa, a network of tunnels and concealed gun pits established in the 1880s when Mother England and Tsarist Russia looked like coming to blows.

Return via the Portobello Road, stretches of which were formed using hand placed stone seawalls. Together, they constitute part of New Zealand’s longest Category 1 structure. Stop for a stroll through Glenfalloch, a beautiful historic woodland garden and homestead overlooking the harbour.