“Surrounded by nature and fuelled by creative energy, Wellington is a compact city with a powerful mix of culture, history, nature and cuisine,” says Tourism New Zealand. Situated at the bottom of the North Island on the Cook Strait, Wellington has also been named the ‘coolest little capital’ by Lonely Planet.

While Wellington is known as a government city, there is more to the coolest little capital than first meets the eye. From the iconic Wellington Cable Car and Botanic Garden, an abundance of great eateries, and wild windy lighthouses the capital has something for everyone to discover, along with the rich history of government.

Day One | Government Precinct and Downtown 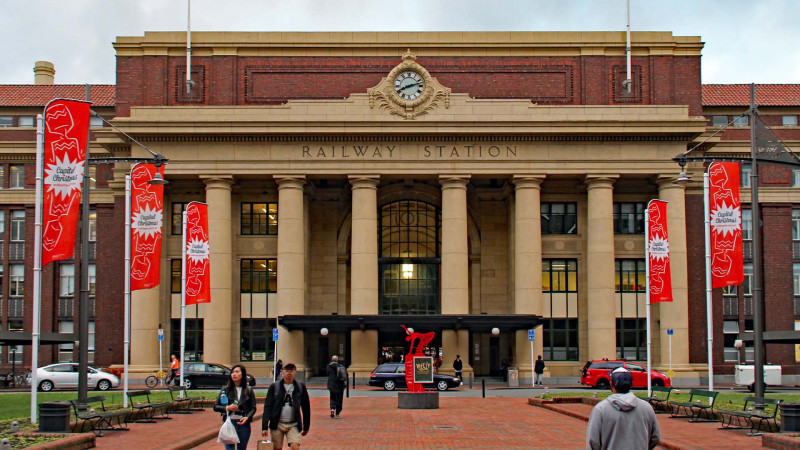 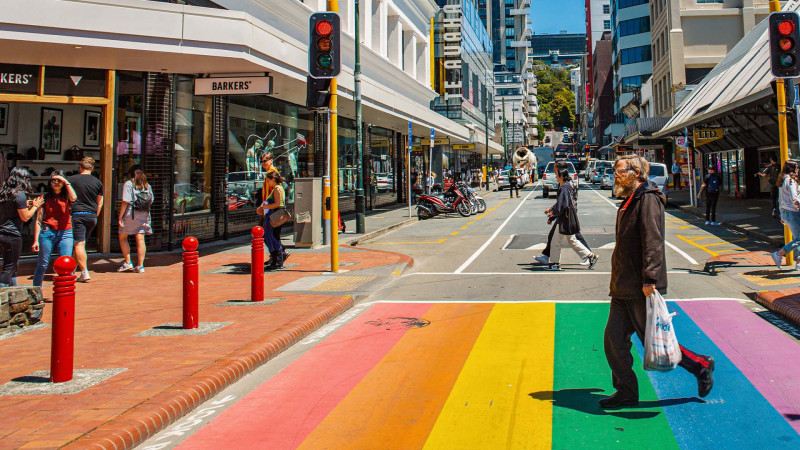 Whether you arrive by plane, train or automobile, start your Wellington tour at the Railway Station, a Category 1 listed building. One of the city’s most loved and certainly best used heritage buildings, the 1937 neo-Classical station with its colonnade of eight towering Doric columns is an impressive sight.

Walk up Mulgrave Street to Old St Paul’s. Completed in 1866, the cathedral is a stunning expression in native timber of the Gothic Revival style. Its interior of soaring arches, exposed rimu trusses and rich kauri sarking has been compared to an upturned galleon – an exquisite capsizing.

In the capital, power and political intrigue are centred on two unlikely neighbours – a 1970s concrete beehive, and a 1920s granite-clad Edwardian Baroque stunner. The latter, Parliament House (1922), is Category 1 listed, as is the equally gracious Parliamentary Library. Public tours run hourly.

Across the road sits one of the world’s great wooden structures, Old Government Buildings (1876). Once home to the country’s entire public sector, it’s a wonderful mixed message of a building – designed to convey the strength of a stone palace, but built from timber to avoid appearing extravagant. Part of the ground floor and the first-floor Cabinet room are open to the public.

Head up Lambton Quay, past the 1879 Old High Court and the terrific Warren & Mahoney-designed new Supreme Court building. Stop at the former Public Trust Building and give thanks to heritage-minded Wellington developer Maurice Clark for saving this ornate Edwardian gem, then duck down Stout St to the former Departmental Building, an Art Deco landmark made famous by 80s sitcom Gliding On.

Hungry? You could try lunch and an authentic heritage experience at Boulcott St Bistro, a charming 1870s cottage dwarfed by neighbouring high-rises, and a Wellington institution. Then head down Boulcott Street to St John’s Presbyterian on Willis Street. On the way be sure to stop by glorious Antrim House, once home to businessman Robert Hannah, of footwear fame, now housing the national offices for Heritage New Zealand Pouhere Taonga.

After nearly two years of earthquake strengthening, St John’s re-opened in 2020. With a lofty spire and handsome timber façade.

A registered historic area, Cuba Street has character in spades, and the city’s most complete collection of Victorian and Edwardian commercial architecture. It’s also a hotspot of small specialist retailers, where many second-hand and vintage treats from clothing to records are to be found. If you’re feeling the need to rest your feet grab a bite in one of the nearby heritage listed buildings that house popular cafés and restaurants.

Next, head to Courtenay Place’s Embassy Theatre. On the way, be sure to visit 39 Taranaki Street, where the remains of Te Aro Pā were discovered during construction a few years ago. The preserved foundations of two of the historic whare are displayed in situ.

The Embassy is a 1920s beauty, tricked out with a marble staircase, dark wood, and tiled floors. For other retro cinema experiences you might also visit Art Deco The Roxy in Miramar or the Penthouse in Brooklyn 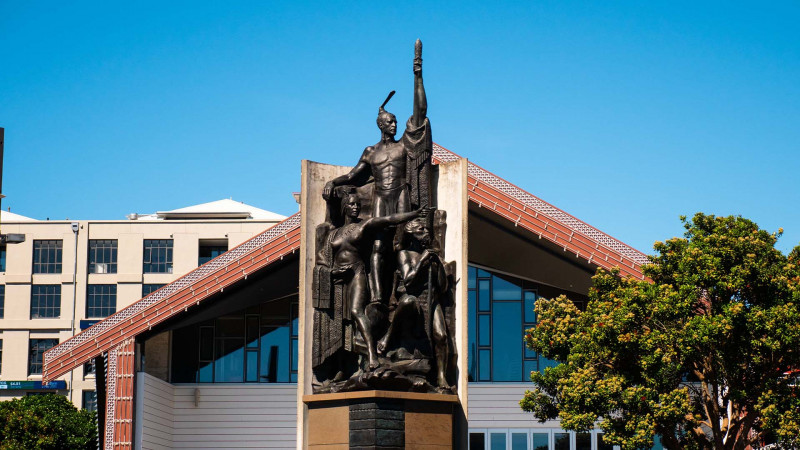 A visit to Te Papa Tongarewa is always different

The hillside suburb of Karori is home to the late John Scott’s visionary Futuna Chapel. Hard to believe, but this Aotearoa New Zealand Modernist icon, in which Le Corbusier meets the Māori wharenui, was once at risk. Now deconsecrated but defiantly undemolished, Futuna is open to the public on Sundays.

For a different contemplative experience, visit nearby Wrights Hill Fortress. Built in the 1940s to protect Wellington from invasion, the restored complex includes a network of underground tunnels and gun emplacements.

Wellington Botanic Garden (1869) is 25 hectares of tranquility, with terrific views of the city and harbour. Ride the Cable Car up from Lampton Quay, then wander down the garden paths. Highlights: the Lady Norwood Rose Garden and the Begonia House conservatory. From here you can also access Wellington’s pioneers’ cemetery at Bolton St Memorial Park.

Head to Government House. Built in 1910, this most English of Newtown addresses is worth visiting not only for the architecture and park-like grounds, but also for its fascinating history. There are public tours at intervals throughout the month (book at gg.govt.nz).

From the early 20th Century, Oriental Parade has been where Wellingtonians take their ease – these days, with imported Golden Bay sand to sprawl on. Landmarks include the fantastically sculptural Freyberg Pool (1963) and the 1930s Moderne Band Rotunda.

From here, wander the waterfront, taking in Te Papa, the elegant 1890s Wellington Harbour Board Offices and the more solidly industrial form of the historic WHB ‘Sheds’. Pause at the Wharewaka (canoe house). Located on what was once the harbour frontage of Te Aro Pā, it houses a conference venue, waka and an eatery, Karaka, whose menu includes signature café-style hāngī food. The waterside lawn is a perfect spot to relax and enjoy the late afternoon sun. 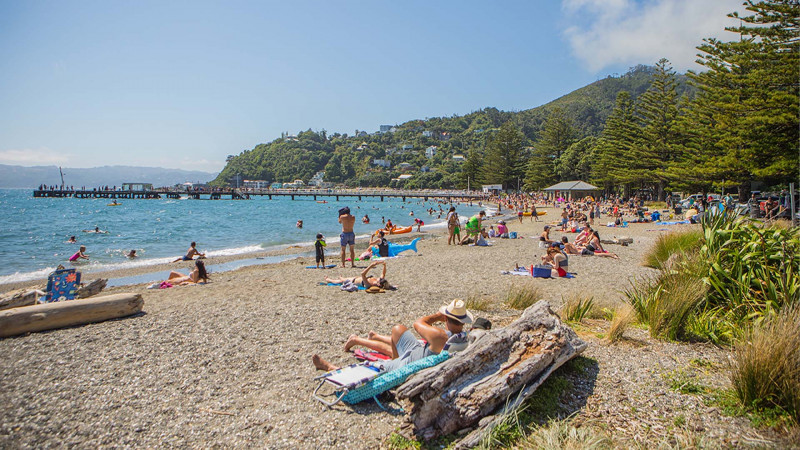 Dive into the capital’s wild side with a visit to Pencarrow Lighthouse (1859), at the wind-whipped entrance to Wellington Harbour.

Just getting there is half the fun. Stop for coffee and shopping at Petone’s Jackson Street heritage precinct, then head around the bays.

A holiday destination for Wellingtonians from the 1850s, Days Bay is a pretty village set between bushclad hills and water, with a landmark 1890s wharf that’s perfect for a harbour plunge. Fuel up at one of the beachside cafés, then hire a mountain bike from The Bike Shed in Eastbourne or put on your walking shoes and hit the eight-kilometre trail to the lighthouse.

Built in 1858, Pencarrow was Aotearoa New Zealand’s first permanent lighthouse – and one of its most valuable given its treacherous patch and Wellington harbour’s heavy traffic. Not everyone could be saved, however: further on, you’ll spy the rusting hull of the SS Paiaka, wrecked in a storm in 1906.

Back in the city, reward yourself with a vist to one of the city’s many historic watering holes and eateries such as the 1917 Category 1-listed former National Bank now home to restaurant Logan Brown.