A four-hour drive north of Auckland, Northland is one of Aotearoa New Zealand's most significant historic areas. Beyond its beauty and tempered climate, the region is home to many of the early places and people who have made us who we are today.

Often referred to as the birthplace of Aotearoa New Zealand, Northland has a rich and unique cultural and built heritage. Take a journey through beautiful scenery while you discover the early stories of local iwi (tribes), our founding documents and the people who shaped our nation. From Kororāreka, Russell to the Hokianga Harbour - your Northland heritage road trip awaits. Get hands on at Pompallier Mission and Printery An appalled Charles Darwin dubbed Russell/Kororāreka a “stronghold of vice” when the Beagle visited in 1835. These days, the onetime whaling port’s greatest sin might be that it’s almost too quaint, a picket-fenced piece of the 19th Century on a Pōhutakawa-lined foreshore.

Start with coffee and pastries at the Pompallier Mission and Printery’s ‘French Coffee House’, before exploring the property. Built in 1842 by the French Marist brothers, the site houses the original Gaveaux printing press on which church texts were translated into te reo Māori, generously on loan from the Kīngitanga. Take a tour of Aotearoa New Zealand’s oldest working factory and see how the early colonial missionaries bound books and tanned leather, then explore the wonderful heritage gardens that were planted from 1879.

Take the Flagstaff Hill Loop Track to the summit of Te Maiki/Flagstaff Hill, where in 1840 the Union Jack first flew, then later fell, then flew, then fell, as Hōne Heke and other Ngāpuhi figures expressed their disillusionment with the new post-Treaty world.

The fourth time the flagstaff was levelled, on March 11, 1845, it heralded the sacking of Kororāreka. At Christ Church you’ll find bullet holes and a memorial to six crew of the Hazard killed in a nearby skirmish. The little church is Aotearoa New Zealand’s oldest, and the historic graveyard is worth exploring.

Enjoy dinner at one of Kororareka-Russell’s eateries, which includes the charming and historic hotel, the Duke of Marlborough, which has been “Refreshing Rascals and Reprobrates since 1837”. 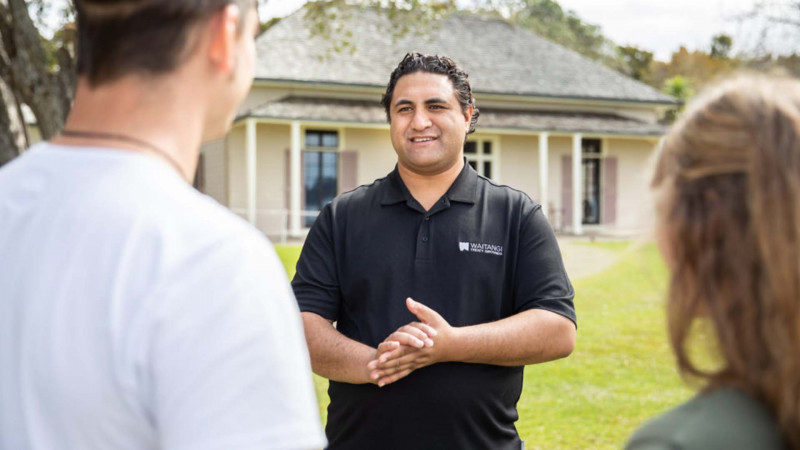 Paihia is the Bay’s tourism hub. Take a sunrise kayak, before devoting the bulk of your day to nearby Waitangi Treaty Grounds. Begin your visit to the grounds at Te Kōngahu Museum of Waitangi, a terrific scene-setter, with a strong collection of taonga and interactive displays illuminating the Treaty signing and its aftermath. The new Te Rau Aroha museum tells a moving story about Māori commitment to the armed forces, including a gallery dedicated to the Māori Battalion’s A Company, which drew heavily from Northland.

The Waitangi Treaty Grounds more than live up to the billing as “birthplace of the nation”. Set on a lowslung peninsula facing Russell across the bay, New Zealand’s first ‘National Historic Landmark’ is a physically lovely site. Food options include a picnic or paying to visit the Whare Waka Café on site. Heritage highlights include the Treaty House and grounds where Ti Tiriti was signed, a beautifully carved Te Whare Rūnanga, and Ngātokimatawhaorua a waka taua, carved from three mighty Northland kauri for New Zealand's 1940 centenary. Enjoy a cultural performance or check out a demonstration at the carving studio. Rangihoua Heritage Park is literally the beachhead of Christianity in Aotearoa – it was on this northern Bay of Islands shoreline, at Hohi (Oihi) Beach, that Samuel Marsden first preached the Gospel on Christmas Day, 1814. The pioneering mission that Marsden’s lieutenants established there was indulged by Ngāpuhi protectors such as Hongi Hika, and overlooked by Rangihoua pā. Even so, its inhabitants must at times have felt beleaguered and forsaken.

When you enter Rangihoua Heritage Park, take a moment to contemplate the view from architect Pip Cheshire’s dramatic wing-roofed shelter, ‘Rore Kāhu’, then follow the valley pathway all the way to the Celtic ‘Marsden Cross’ beside the foreshore. Keep an eye out for vestigial building foundations.

Kororipo Heritage Park, Kerikeri Basin, the Church Missionary Society’s (CMS) second mission station was built to last, as evidenced by the heavyweight walls of the 1832 Stone Store at Kerikeri Mission Station. The store serves as a soft landing in this dramatic, dynamic heritage site. Grab tour tickets, peruse the replica muskets and other missonary-era related souvenirs as well as one of the most eclectic Kiwiana shops you will ever see in New Zealand, then head over to the 1822 Mission House, aka Kemp House. The country’s oldest surviving building is an honest house that conveys a vivid sense of the lives lived there. Walk the garden trail, then head up the hill to another powerful site, Kororipo Pā, from where Hongi Hika overlooked the riverside mission. Finish with some fresh baking at the Honey House café behind Kemp House.

If you have time don't forget to visit Te Ahurea, an interactive pā site that will transport you back in time, located across the river from Kerikeri Mission Station. 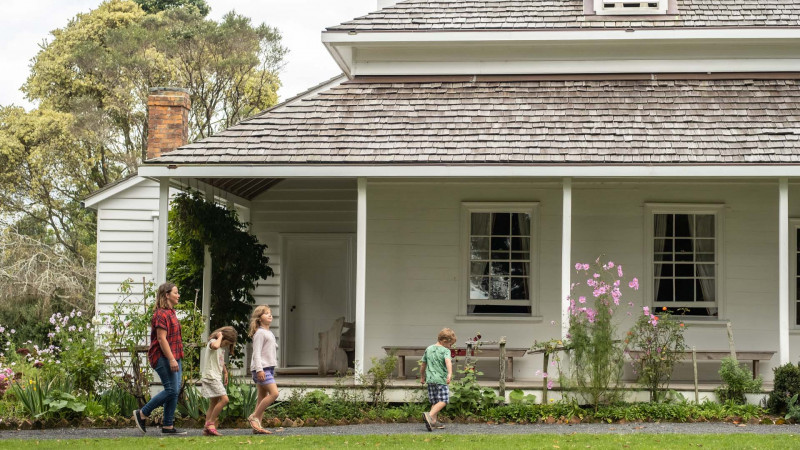 Take in spectacular views and heritage at Māngungu Mission

Head inland on one of the country’s earliest roads to Te Waimate Mission. Instigated by the CMS as a kind of model English village where Māori could be schooled in European farming techniques and brought to the Lord, it originally included workshops, a printery, a mill and blacksmiths, a school and three mission houses. What’s left is a genteel and well-preserved Georgian house and neighbouring St John the Baptist church.

Wind past Lake Omapere, the locale of a key pā for Hōne Heke, and around the upper reaches of the Hokianga to Māngungu Mission. Established by the Wesleyans in the 1830s, Māngungu was the scene of the single largest signing of the Treaty, when on 12 February 70 Māori signed, attended by a crowd of up to 3000. Among the mission house’s collection is the mahogany table used for the signing.

West of Rawene, take a right off the Twin Coast Discovery Highway to Clendon House. Merchant, ship owner and Aotearoa New Zealand’s first US consul, James Reddy Clendon popped up, at many seminal early Māori-Pakeha interactions, among them the 1835 Declaration of Independence and the 1840 signing of Ti Tiriti. Equally fascinating was Clendon’s widow Jane, a younger woman of Hokianga Māori descent, who managed to hold on to the property despite being left deep in the red and with eight children. Furnished with the Clendon family collection – including the top hat that Clendon reputedly wore to the Treaty signing – the 1860s house feels as if its occupants had just popped out for a stroll.

Rawene is a delightful quaint seaside spot with art galleries, cafés and some shops that might surprise. Grab a coffee, then head home via the wonderful Waipoua Forest.