When it comes to good ol’ kiwi ingenuity Otago has it in spades. The region known for its vast plains, gold era and, of course, Pinot Noir, was also home to some of the most entrepreneurial minds of its time. And of course, the Ōamaru steampunk scene. 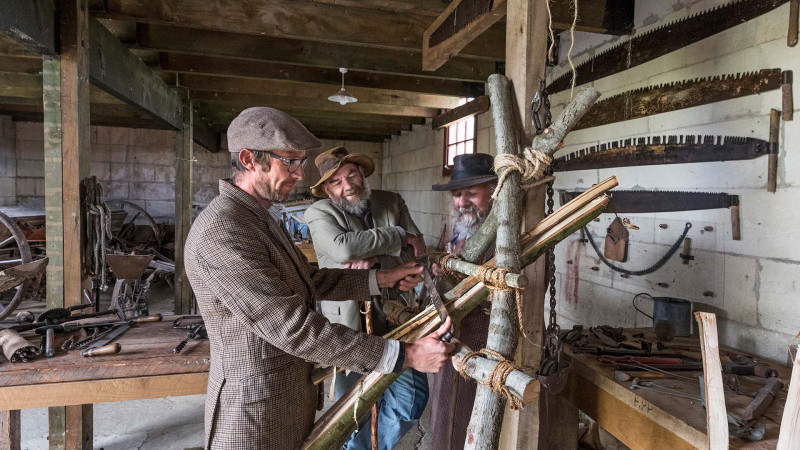 Swaggers at home at Totara Estate

Ōamaru is the town where heritage gets funky. The ‘Steampunk Capital of New Zealand’ earned its reputation on the strength of it well-preserved Victorian precinct, catnip for retro-futurist enthusiasts. Wander Tyne Street and you’d think you’d walked into the late 19th Century, when Ōamaru’s growing wealth financed the construction of a host of handsome whitestone commercial buildings. Many now house second-hand bookstores, antique dealers, galleries and cafes – plus the eye-opening museum/gallery experience that is ‘Steampunk HQ’. Best time to visit is Sunday morning, when the precinct hosts the Ōamaru Farmers’ Market and vintage trains are running.

Five minutes from Oamaru lies Totara Estate, birthplace of our multi-billion-dollar frozen meat industry. Faced with a slump in wool prices, in 1882 Totara’s owners became the first to use new refrigeration technology to send meat to England. You can happily explore the cluster of stone farm buildings self-guided but consider taking one of the tours. Hear stories about larger-than-life characters, feed the heritage breed sheep, then finish with a themed and rustic morning tea.

Clarks Mill is a 19th Century engineering marvel, and a survivor of a period when North Otago thrived on wheat growing and flour milling. Constructed from Ōamaru stone, the four-storey mill building only ceased operation in 1976, and its original machinery has been lovingly restored. Visits can be made by arrangement, but otherwise the mill is open on Thursday mornings and Sunday afternoons. Alternatively, keep an eye out for their operating day, when the mill is running and the miller’s house is open to visitors.

Day Two | Through the Maniototo to Ophir 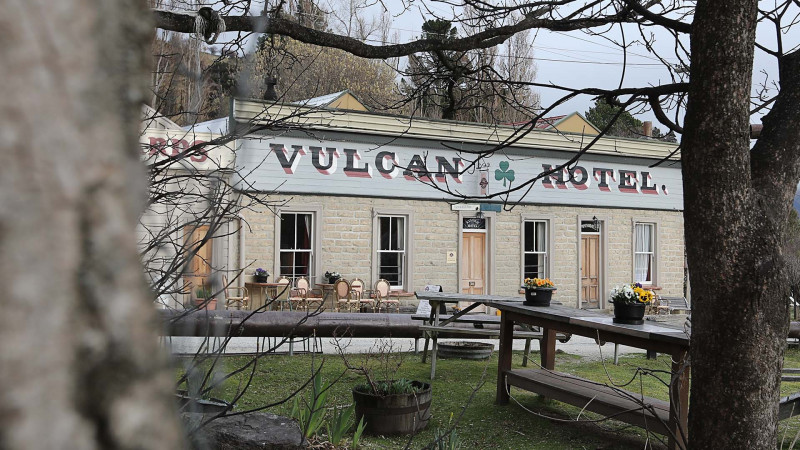 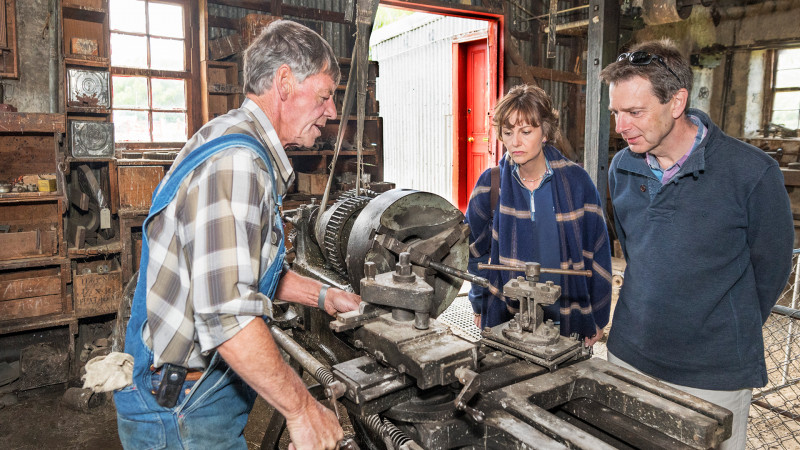 Time to head to Central Otago, by way of Waikouiti, home to Johnny Jones’s dramatically sited farm, ‘Matanaka’. A shipowner, whaler and trader, in 1840 Jones became something of a one-man colonising enterprise, importing kitset buildings, animals, crops and about a dozen families from New South Wales to establish Matanaka. The surviving farm buildings are the South Island’s oldest, and they make a dramatic impression, five red-brown timber structures arrayed across a grass plain on a high coastal cliff. Note that Matanaka is part of a working farm, so tread lightly when visiting.

Backtrack briefly to Palmerston, then take the ‘Pigroot’ – aka SH85 – through the Maniototo to the former mining town of St Bathans. Landmarks here include the reputedly ghost-bothered Vulcan Hotel, and the otherworldly Blue Lake, the prettiest byproduct of sluice-mining you’re ever likely to see.

Another quick backtrack will bring you to Oturehua and the Hayes Engineering Works and Homestead. You could describe the works as an example of the Kiwi ‘No 8 wire’ mentality in action – although it was actually a fencing wire strainer that established Ernest Hayes as one of our most inventive pioneers. That innovation – which is still in use today – was one of a stream of ingenious labour-saving agricultural devices turned out by Hayes’s Oturehua factory from the 1890s. The family homestead is well worth a look, but it’s the workshop, with its earthen floor, forge and cat’s cradle of shafts, belts and pulleys, that evokes the spirit of the man.

Drive down the Ida Valley, which inspired the work of artist Graham, over Blacks Hill to Ophir. Aspirationally named after the biblical port of great riches, the gold rush town fell into decline after decisionmakers opted to run the Otago Central Railway through rival Omakau, on the opposite bank of the Manuherikia. The silver lining was that the heritage fabric was left largely undeveloped and much has since been restored. The crowning jewel is the 1886 Ophir Post Office, New Zealand’s oldest continually running postal agency. Take a tour, then post someone a hand-franked card – from Ophir with love.

To keep with your heritage-themed exploration, the 1920s Art Deco Blacks Hotel is worth a look in, as is Pitches Store, a Category 2 listed building, circa 1880s in schist stone, and now a boutique hotel and award-winning restaurant. Bannockburn Sluicings are recognised as a national landmark of significance through recognition as a Tohu Whenua site Photo: James Jubb / Tourism Central Otago

Exit Ophir over the elegant 1880 Daniel O’Connell bridge, one of the last suspension bridges still in use in Otago, then head to Clyde.

At the height of the Dunstan Rush of 1862, Clyde would have been a heaving mass of humanity, with 7000 miners and hangers-on occupying the town and surrounding area. Several buildings from the gold rush era survive, including the 1864 stone courthouse, a town hall and library done in Classical style complete with Doric columns and the 1900 Dunstan House Hotel – still a likely-looking spot to tether a horse.

Drive through the Cromwell Gorge, past the Goldfields Memorial where Hartley and Reilly found the first Dunstan gold, and on to the Bannockburn Sluicings. Here, a well-signposted walking track winds through a landscape of cliffs and ravines, rock tailings and tunnels created by miners water-blasting their way through to pay dirt.

Head back over the Cromwell bridge, then turn left and head around Lake Dunstan to the turnoff to the Bendigo Historic Reserve. Set high among schist outcrops overlooking the Upper Clutha Valley, it’s a poignant place, scattered with relics of quartz mining ventures that generally failed to turn a profit – heartbreak hill.

Head to Wanaka for lunch, perhaps followed by a visit to one of the region’s many cellar doors, then take the Crown Range road to Queenstown. On the way, you'll pass the Cardrona Hotel. The definition of an iconic heritage establishment, and one of the country’s most photographed buildings, the 1863 hotel includes a restaurant. Across the Crown Range, check out historic Arrowtown and the nearby Chinese miners settlement. From here, Central Otago is your oyster.